HushSMS is a tool to sent a class zero message (aka Flash-SMS) or a stealthy PING message to another cellphone.

The “Silent Ping” enables you to sent a message to another cellphone without the owner getting knowledge about.

This is not some kind of hack or whatever. It’s a normal function per standard and works on any phone.

Q: Why such a software? A: I regulary need it in my job. Sometimes I have to be sure a specific phone is switched on and I can send information to that phone without it beeing stored (class zero message).

It runs on Windows Mobile 5 and 6 based PocketPCs.

Send bugs and comments to: c0rnholio(*at*)netcologne(*dot*)de

Copy the CAB file to your device and double click it.
The program is installed to \Program Files\HushSMS\HushSMS.exe.

There are three functions:

– To send a normal sms, leave the checkboxes for “Class 0” and PING unchecked. If you want a receipt enable the “Return Confirmation” checkbox.
– To send a class zero message enable the “Class 0” checkbox and write your message.
– To send a silent PING just enable the “PING” checkbox. There is no need to write something in the Textbox, because the target phone will discard it anyway.

If you enter the number manually you can type it in international or national format.
You can alternately choose the number from your address-book but it has to be in international format also.
The program will pop-up a message box to notify you about the success or failure of the sending process. This message box
might be under an overlaying window if you have other programs open (a file explorer for example).

A word of warning: If you send a class zero message to a windows mobile device, your number will not be shown. Instead of the senders number, windows mobile will show something like “Network Message”.
So in general this tool could be used in a manner it is not intended and designed for. So be responsible!

That’s it. Enjoy it, as always it’s freeware.
(but if you like this little program feel free to donate…I will buy beer and stuff…you know… 🙂 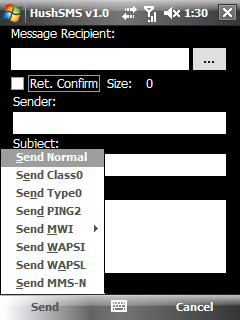